Due to unforseen circumstances, author Rona Arato is not available for our March program.

Longtime WTJHS supporter, past president, and general bon-vivant
Gib Goodfellow has stepped in to provide us with a fascinating narrative of his recent wandering in Italy:

Italy: Sites You Nave Not Seen, Stories You Have Not Heard

“At the hotel pool in Katmandu I overheard the tour organizer bragging that he had been to Italy a dozen times but his next trip would include all the things he had not done.  Sure enough. We landed in Rome and took off immediately for Sorrento where we had two nights.  We drove right past Pompeii on our way to Herculaneum, the city buried in ash which preserved both wood and decorations.  We spent some time on the Amalfi Coast but did not make it to the Isle of Capri because our leader had been there.  We had the best meal of the trip at a farm in the Sila Mountains in Calabria.  The network of tunnels and aerial-highways are feats of engineering.

“We took a ferry to Sicily where we stayed in Taormina, Agrigento, and Palermo to visit Mt. Etna, the Greek sites at Syracuse, the Roman hunting lodge at Casale, and the Valley of the Temples.  Then on to Sardinia where we spent four nights with days full of sightseeing including fortified dwellings and stone towers built before the Phoenicians arrived. The spectacular Emerald Coast offered wonderful vistas.  At Alghero I experienced the most beautiful swim of my life. 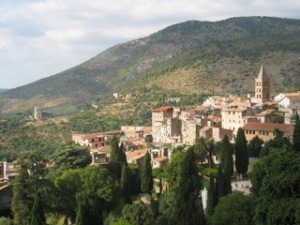 “We had our second overnight crossing, disembarking at Genoa, Italy’s largest port.  After a city tour we drove to the Cinque Terre Region, where Phyllis, a friend and I walked through 12 kilometers of vinyards between the five villages which cling to the cliffs.  In Tuscany we explored the walled medieval centre of Lucca and walled village of San Gimignano on a mountainside.  Enroute to San Gimignano we drove by the leaning tower of Pisa.  The leader had not intended originally to stop but there was a vote taken and the bus made a U-turn.  We had a one day tour of Rome and another day to explore Rome on our own.  The finale and one of the highlights was a trip to Villa d’Este with its 200 fountains in Tivoli.”

This entry was posted in Current Events. Bookmark the permalink.
Loading Comments...