Then and Now: Junction Streets 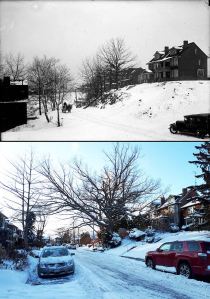 Abbott Ave. facing west towards Indian Road Crescent, 1925 and 2017.The house on the hill is still there, but the one in the valley is gone. The area has been graded with landfill. 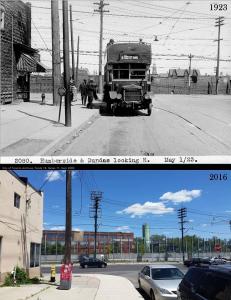 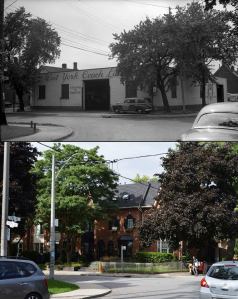 Bloor Street West on the east side of High Park Ave. facing north, 1966 and 2018. In 1966 the yellow crane could be seen removing the loop, 2 years before the Bloor streetcars were removed as well. Today there is an open grassy area and Bike Share Toronto where the loop once was. The northeast corner of Bloor Street West and Keele Street, 1962 and 2018. 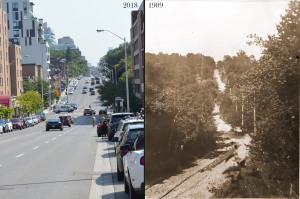 West Toronto Junction Historical Society Published by Trevor PS · August 15 at 7:23 AM · The northeast corner of Pacific Ave. and Dundas Street West, 1890 and 2018. The Third Church of Christ Scientist was built in 1928 at 70 High Park Ave, just north of Bloor Street West. It was designed by Toronto Architect Murray Brown in a simplified Classical style. The Church was suffering from a low congregation and lack of maintenance funds, so the property was sold to a condo developer in 2003, who agreed to retain all of the original within the new structure.

Bloor Street W. facing west past Indian Grove towards Keele Street, 1921 and 2017. Prior to the founding of the TTC, the city ran “Toronto Civic Railway” streetcars in newly annexed areas of the city. “Birney” cars operated on Bloor West between Runnymede Road and Dundas St. West, where riders could transfer to the Toronto Railway Company streetcars. High park is in the background. 2017 photo taken by WTJHS member and Transit Historian Trevor of Transit Bricks. 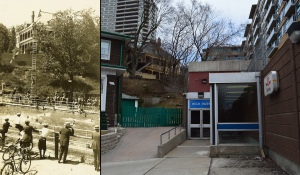 Indian Grove, facing north past Glen Gorden Road. In 1917 the road was still dirt, but in 2017 there are way more trees. Bloor Street West, facing east from Glendonwynne Road towards High Park in the distance. 1906 and 2017. 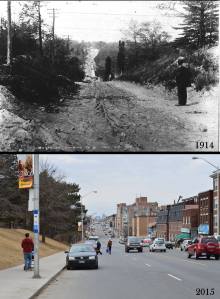 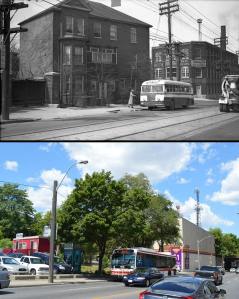 Subway Hotel on Keele Street, just north of Dundas, 1953. Later became Keele Hotel, and eventually burned to the ground. Today there is an empty lot where the building once stood.

Bloor Street facing east to Keele Street. 1966 and 2017. The streetcar line from Keele to Jane Stations was removed when the Bloor-Danforth Subway extension was opened.

Keele Subway Station, looking east. 1968 & 2016. Vilnius Manor now sits where streetcar loop once was. The higher view on the left is now blocked by trees (Dundas Station is visible in the distance.) 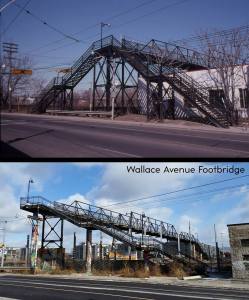