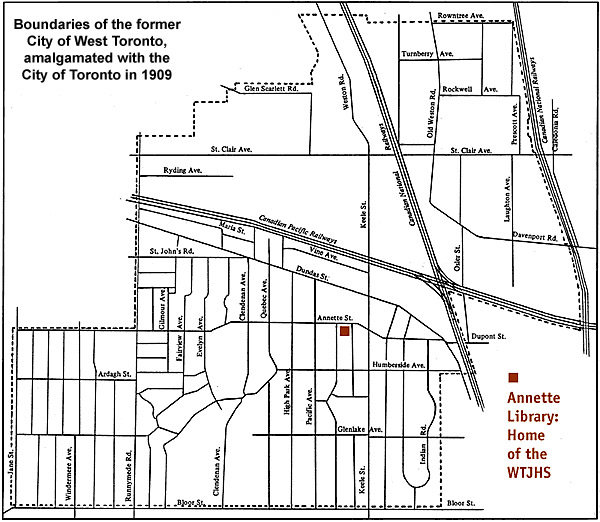 From our “Junction Historical Facts” pamphlet [compiled by Frank Remiz] available free at our archives:

1857: W.C. Keele lets the Toronto Turf Club establish headquarters and a 1-mile racetrack on his estate.

1879: A third railway line is built through the area (creating the Junction triangle). 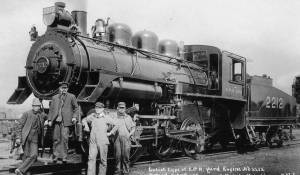 1888: Founding of the Village of West Toronto Junction.

1888: Establishment of a branch of the Mechanics’ Institute, which lent books and held upgrading classes for adults.

1889: Annexation of Carleton and Davenport to form the Town of West Toronto Junction.

1904: The residents vote to ban the sale of alcohol, because of unruly workers.

1908: Incorporation of the City of West Toronto.

1909: Amalgamation with the City of Toronto.

1909: The library on Annette Street is built (designed by Ellis & Connery).

1914: High Park Trunk Sewer is installed north of Bloor St., and Wendigo ravine is filled in, as part of residential development.

1914-18: General Malcom S. Mercer, Corporal A. McKinnon and thousands of other residents fight in The Great War.

1924: The TTC becomes the dominant transit system, with frequent streetcar service on Dundas, from Runnymede Rd. to downtown Toronto.

1978: The Heintzman piano company moves its headquarters out of The Junction (to Hanover, Ontario).

1981: Some people rally to protect the CPR station from demolition, and subsequently form the WTJHS. 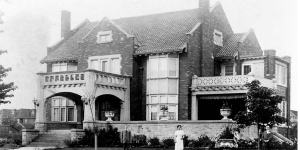 1994: Redevelopment planning of the large industrial area on both sides of St. Clair Ave. begins.

D.W. Clendenan — The first Mayor of the Town of West Toronto (1889) (and earlier the first Reeve). During his term, he ensured the development of churches, and enticed businesses to settle in the community.

G.W. Clendenan — The coroner of York Township, the Village’s medical officer of health, a surgeon to the CPR, cousin to D.W., and brother-in-law to John T. Gilmour.

John T. Gilmour — A physician and surgeon, he was an outspoken reform advocate, and the first editor of a local newspaper. In 1890, he was elected MPP because of temperance principles.

Mary Brown — An escaped slave from Maryland, she eventually settled in a small cottage, where, sustained by her faith, she raised and sold vegetables to the villagers.

William C. Keele — An English lawyer who settled in the area in 1832, he published various legal books, and later helped popularize thoroughbred horseracing.

Theodor A. Heintzman — After working at piano-making companies in Germany and the U.S., he built four in a kitchen in Toronto in 1860, established his own company in 1866, and built a large factory at Keele & Dundas St. in 1888 (later employing 200 craftsmen).

Archibald Campbell — He relocated his Chatham-based flour milling company to the area south of Junction Rd., where, by 1901, he was producing 1000 barrels of flour daily. It was then bought by Maple Leaf Mills, and continued to operate until 1989.

A.B. Rice — Editor of the York Tribune, and later a columnist for the West Toronto Weekly, he played a key role in the establishment of a high school and other civic institutions.

Mary Cherry — A strong advocate for the rights of children, she helped establish a second local school. In 1905, she became Principal of Western Avenue School, and established its excellent reputation.

Dr. Robert Jackson — Concerned with children’s nutrition, he developed and produced the world-famous Roman Meal Cereal at the striking building at the north end of Pacific Ave.

Elizabeth McCallum — The Town’s first librarian, she was very effective and efficient, aided by her prodigious memory.

Allan Royce — The son of a farmer who settled near Davenport Rd., he became an executive in a railway company linking Toronto with points west, served as alderman in 1889, and helped pay for a church.

Minerva Reid — One of the first female doctors in Ontario, she was a founder and chief surgeon of Women’s College Hospital. After World War II, she successfully agitated for the construction of a veterans’ hospital.

Josiah Royce — A former NWMP constable, he became a member of the Junction Police Force in 1889, and eventually its Chief, maintaining law and order during a tumultuous period. He later retired to Alberta where he became a Justice of the Peace and judge.

And, speaking  of  the Junction, from our newsletter’s Centennial Edition of 2008:

The Junction is celebrating the Centennial of its incorporation as an independent city in 1908, which it remained for one year and nineteen days.  Then it joined Toronto as an equal: 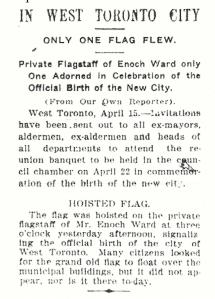 So there you have it: “Junction City” began with plans for a party and an act of independent spirit. It was not called “Junction City” but rather the City of West Toronto; an alias, of course. Everyone up and down the line knew it as simply the Junction.   In this special Centennial Edition of the Leader and Recorder, we’ll preview the party coming up in the Centennial year and reflect on the independent spirit that got us here.

JUNCTION OF THE NATIONAL DREAM

Originally the meeting place of two first nation’s trails, the Junction was on a portage route to a Seneca Village at Baby Point, in strategic location to hold control ofthe Humber River. After the American Revolution, Governor John Graves Simcoe carved out Yonge and Dundas Streets as supply routes to fend offthe inevitable American attack. One of the first estates, Aikenshaw, was near what is now No Frills on Pacific Avenue, just south of Dundas Street West. Legend tells us that its fields were cultivated by the hands of former slaves who had come up via the Underground Railway.

Ironically, given it’s later “dry years,” the early Junction consisted of a couple of taverns, slaking the thirsts of farmers coming to and from market. In the Upper Canada Rebellion, William Lyon Mackenzie and his rebels robbed the royal mail coach at the Peacock Inn, just outside of what is now Coffee Time Donuts at Old Weston Road and Dundas Street. For years, much of this area was given to sport. W.C. Keele laid out the Carleton Race Course: along Annette Street, down Pacific Avenue, onto Glenlake Avenue on to the home stretch up High Park Avenue. The first few runnings of the Queen’s Plate were held there and the first horse to win was named Don Juan.

And then came D.W. Clendenan. The King of the Junction as David Wencer’s article calls him in the Legends of the Junction portrait. D.W. Clendenan bought up the race course and adjacent lands and laid out a village that would become a town and then a city. He was first mayor of the village and the town, but like Moses didn’t make it all the way to the promised land of the city. Unlike Moses he left in a delicious cloud of scandal.

Canada came together at the Junction. While the hammering in of the last spike would complete the railway in the West, the CPR brought its Ontario and Quebec lines into the Junction to merge with the Toronto, Grey and Bruce, and its Credit Valley line. The country was complete from coast to coast.

Tory Toronto now had a more progressive rival living to the rhythms of the Firemen’s Bell which rang three times a day.

Women predominated in the Junction. (See Kristen Buckley’s portrait of Dr. Minerva Reid.) Midwives and doctors and school principals. The Temperance movement, now scorned, was a progressive and humanist outfit, with a devotion to the rights of women and children. Anyway, the Junction took to temperance like a drunkard took to drink, and passed the Local Option to remain dry until 1996,

The Junction has always been a meeting place for business and the arts. Its first book store and art gallery is where Post and Beam Reclamation is now on 2869 Dundas Street West. The Heintzman Piano Factory turned out rivals to Steinway where the Options for Homes concominium project are going in at the site of the old Canadian Tire store on Keele Street, just north of Dundas West The Junction College of Music serenaded the Heart of the Junction at Keele and Dundas Streets from the open windows of the Campbell Block. It was a happening town.

A.B. Rice, the dean of Junctions writers, covered village, town, city and neigbourhood for forty years. In his 1943 column Stray Thoughts on Matters of Public Concern he describes the “Three Phases of Life in the Junction.” The Land Boom (1884-1892), the Slough of Despond, (1892-1897), and the Renascent Period (1897-1909). It was at the peak of the third period that the Junction incorporated. But the Renascent Period began with the honking of a horn.

C.C.M, the Canadian Cart and Motor Company introduced the Russell Model A, “the thoroughly Canadian Car, made with Canadian materials, Canadian labour and Canadian capital,” and a powerful Knight engine, By the time it rolled off the assembly at Weston Road and St. Clair Avenue, the Junction’s Slough of Despond was over.

As early as 1907 there had been a movement for a: “Greater Toronto Junction rather than a Greater Toronto” and some would “suggest that we extend our town west as far as Jane Street and north to St. Clair Avenue. Make it an independent city, and get power to run it.” (For the full boundaries of “Junction City” see the map in this issue.)

January 22. In the words of the Telegram’s laconic scribe: “Council did not lounge as long as usual in the saddle bags last night . . . Within two little hours the members thereof had decided to convert the busy railroad town into a city; to call it West Toronto [Editor’s Note: a controversial choice – but the Mayor liked it]. Goodness alone knows how much more Council would have decided to do had there been no hockey match that night.”

Junction folk were “so confident of the future greatness of the little city,” A.B. Rice wrote, “that they thought little of possible union with Toronto. The community was proud of the difficulties they had overcome and they were happy.”

Happy at the prospects of the Champion Junction Shamrocks Junior lacrosse team — the lions of the young city — enjoying a running battle with the Suburban Railway Company whose streetcars inexplicably stopped at Humberside Avenue and refused to travel on to KeeleStreet; watching police raids at “Temperance Hotels”, fretting over the ever present costs of getting water to the Junction, and thrilling to the exploits of a local Sherlock Holmes who solved a crime by the evidence of fingerprints on a dusty picture frame. The city’s assessment was reported as $6 Million and the Chairman “ventured the opinion there would be no increase in taxation.”

On April 22, 1908, a Commemoration Feast in honor of birth of the city was held at City Hall on Keele Street just south of Dundas Street West, where the Fire Hall is now. Attendees toasted the King and drank to the Dominion of Canada. The Telegram reports that only lemonade was consumed.  W.F. Maclean, the local Member of the Provincial Parlaiament, replied to the toast with the declaration that he ‘was a Canadian, nothing but a Canadian, that he would not be anything else if he could.’ Whereupon, every present felt more at ease,” observed the Telegram.