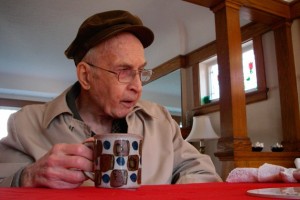 Remembered by his friends and admirers, reading his work including his classic, Last Sad Day for Our West Toronto Station.  Poet Robert Priest recently quoted John Robert Colombo on Souster’s lasting impact: “Ray served as the still centre of poetry in Toronto. He established a north pole to complement the south pole of the academics. He single-handedly introduced Modernism in poetry to the city. He also corresponded with many of the movers and shakers of American poetry — notably Charles Olson, Frank O’Hara, Robert Creeley, LeRoi Jones — and brought them to Toronto to read at a series of fabled readings at the old Greenwich Gallery and the later Isaacs Gallery. Not for nothing was he known as the Dean of Toronto Poets.”